Rolling Back to Move Forward: Taking a Page from Walmart's Playbook

So, I was in Walmart the other day checking out the new Lego Batman game for my son, when an Associate comes over and changes the price on another game. I think the correct term is "roll back."  We'd been looking at the game for a while but on the fence about buying it. The price wasn't bad; the game looked good, but it was from a gamemaker we'd not tried before. And, you know, you just never know. I'd been burned before. Well, the savings was for 5 dollars off the regular price of $19.99. Pretty substantial. Hard to resist.

Links to this post
Email ThisBlogThis!Share to TwitterShare to FacebookShare to Pinterest
Labels: Amazon, insomnia, shorting the undead, smashwords

Science Giveth & Taketh Away: The Story Behind Golgotha


There are as many types of fans of the Undead as there are explanations for how the Undead come to be. Science is, of course, a popular trope in this subgenre of horror, not only because science fact and fiction offer a virtually endless array of explanations, but because science can be taken as a metaphor of the human condition as we struggle with the moral and ethical questions of our technological and intellectual advances.

Or, simply because it makes for a good storyline.

In Golgotha, I explore the origins of the Undead at the hands of an overly ambitious and ethically bankrupt scientist who has become entrenched within a government ostensibly interested in bettering the human experience. Ostensibly. What we see is a dysfunctional government ruled beneath the oppressive hand of a single, powerful man. What we get is a world of unimaginable horror masked behind the lens of beneficent evolution.

Aware of this is the scientist indirectly associated with such a state. He blames himself. In attempting to atone for his perceived sins, he subjects himself to the very treatment that will both kill him and render him reanimated, all so he can test on himself an antidote that will, once and for all, rid the world of the Undead and the threat he perceives in their scourge. The dramatic experiment is captured in a series of recovered voice transcripts and is retold through the eyes and ears of the scientist's corrupt counterpart, lending both an air of objectivity and unreliability to what we, as readers, are witnessing.

Many of you will recognize the Hebrew term Golgotha, meaning "place of the skull," as the name of the hill where Jesus was crucified. For purposes of this story, the word has a double meaning. Being a book about zombies, the reference to the skull--in particular, the brain--requires no explanation. The scientist whose last moments we are witnessing is, in some ways, like Jesus himself, atoning for the sins of man, rising again after death, and then returning home. But the allegory can be equally applied to his counterpart:


He was a religious man, so the first time Special Advisor to the President of the United States Richard Daniels heard the recording, a single word rose up in his mind. The second time, he became violently ill and also afraid. The third and final time, those emotions were still there, but by then he’d managed to control them. He was a religious man, and he wished he wasn’t, for how could any god, much less the God of his religion, forgive what he had done?
--from Golgotha


Did the experiment succeed? Well, what would be the fun in telling the punchline?


If you're interested in reading Gologtha, the book is currently offered for free at Amazon.com (it's normally only 99-cents). 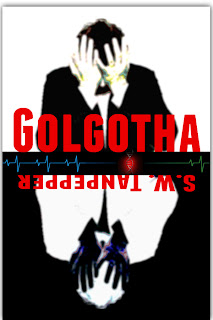 If you're interested in learning more about the dystopian world post-Gologtha, then I invite you to check out my new science fiction thriller series, GAMELAND, an 8-episode epic told from the point of view of Daniel's daughter fifteen years later. Available in single and multi-episode packages. For more information, check out the GAMELAND page on my website or on Facebook.

About Saul
eFiction magazine calls Saul an author armed with "a PhD and a whacked out sense of humor."

Saul spent his formative years in a leaky century-old house overlooking the Erie Canal in Upstate New York. His bedroom was a refurbished attic, which he shared with all manner of creatures, not all, he is convinced, flesh and blood.

After bouncing around the US and Europe for several years, he settled down to pursue a career in the sciences, opting to study the mysteries of human molecular genetics. But even positions as an experimental biologist, teacher, manager and biotech entrepreneur couldn't keep him from his true passion as a storyteller.

He now writes speculative fiction full time from his home in the San Francisco Bay Area. Although his house is now attic-less and waterproof, he continues to be haunted by a variety of creatures, including a wife, kids, four dogs, three cats, six chickens, a wayward rooster, and one very grumpy possum. They are all flesh and blood.

Except, maybe, for the possum, which he's convinced is the reincarnated spirit of Jack Torrance.﻿
﻿