Probably one of the most tedious (if not frustrating) aspects of the writing-for-publication process is keeping track of submissions. A necessary evil, it still manages to drive me batty. Every house, editor, and agent wants something different: SASE/no SASE, first 10 pages (no, first 20 or 50), snail versus email versus online form sub, YA but not MG, MG but not mystery... and on and on.

Plus, we're seeing even more uncertainty in the market - who's where when, who's going where, who's no longer open.

So, what's the easiest way to store and maintain all that information in a way that ensures you have the most up-to-date details? Do you use an online website such as QueryTracker? A dedicated software package? An analogue system (hardcopies of letters, file cards, etc)? Regardless of what you use, it's absolutely essential that you keep track of those subs, if even to avoid those embarrassing breaches of etiquette. Mostly, it's just good business practice.

For me, what I've found is a spreadsheet (MS Excel) works best. I like knowing that I have control over the information. And while that means doing the legwork myself, it also means I can customize it however I want. 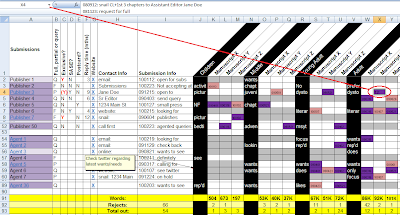 I like Excel because you can keep multiple levels of information through hyperlinks, comments, and embedded text. You can freeze panes so that headers are always in view. Colors provide cues as to what's out, what's been rejected, where I want to send, who's closed, etc. I also use shorthand notations and other tricks to minimize text while maximizing information. For example, I use ISO standards for dates (YYMMDD) that allow me to search and sort.

I'm curious. How do you keep track of all this information?
Posted by Unknown at 10:15 AM 1 comment:

WRT: Putting Horse Before Cart – Why You Should Consider Writing Your Query Letter Before Finishing Your Manuscript

You know, you really should write your query letter summary paragraph before you sit down to write the first words of your next project.

Let me explain what I mean.

Anyone who has ever finished a novel and sat down to query an agent or editor knows what it’s like to freeze in front of the keyboard, unable to summarize key story points and characters in 250 words or less. Why is that? Well, aside from the obvious reason (you know your story so intimately that pinpointing the most critical elements sometimes seems like an exercise in arbitrariness, though it’s really more like not seeing the forest for the trees), I think a lot of the difficulty derives from our writing habits.

Maybe the problem stems from holding onto outdated perceptions of what the story is about. While you might set out to write with certain objectives in mind, you don’t adapt those objectives as the story matures. It’s so easy to forget that those unexpected and compelling twists of plot or character insights that waylaid you along the way have also commandeered your story. It’s no longer what it started out to be. While discovery is so intrinsic to the organic nature of writing and why we derive so much pleasure out of the act of doing it, it makes writing the summary a bit more challenging. Now, you have to go back and reassess with the mindset not of a writer, but of a reader.

One of the biggest reasons I struggle with querying comes from realizing I haven’t spent enough time developing the most commercially relevant aspects, whether it be story arc, conflict, character... whatever. I get to the query and, for the first time, am forced to think about this character’s role, the purpose of that character’s personality strengths or flaws, the reason for structuring the story a certain way, or defining the conflict as I did, from a purely market-driven point of view. I often find then that the most compelling attributes haven’t been well developed or even incorporated.

Arguments aside about whether you should outline or synopsize before writing, you might find it useful to write that brief query letter summary both before and frequently throughout the course of writing your book. This will help you focus on those oh-so-important key elements and make writing the real query afterwards a piece of cake. (For those new to writing queries, a few keystrokes and your basic search engine will reward you with a trove of helpful resources :blogs, boards, articles....)

Oh, and one last thing: those early query letter summary paragraphs? Nobody should ever see them except you.

WRT: The Lonesome Journey – Traveling Alone, with a Loved One, or with Strangers?

I have something to confess: I hate admitting I’m lost. Oh, I don’t mind getting lost (happens a lot), or being lost (it's practically a perpetual state for me), it’s the idea of having others know I’m lost that I hate. And forget about asking for directions. I’d rather slink into the nearest Walmart or Texaco for a map (I know, it’s so-o-o 2005 not to have a GPS):

Cashier: “So, you’re lost?”
Me: “Me? Ha-ha. No, actually I needed something to line the birdcage in my car.”

Gas station attendant: “So, you’re lost?”
Me: “What? Ridiculous! No, I’m just trying to revive the ancient art of map-folding.”

Except it’s more than that.

See, this is also exactly how I behave when I write. I hate the idea of a work-in-progress that's not absolutely, positively one-hundred percent polished (in which case, it's not a WIP anymore). I hate the idea of a WIP being judged as directionless, when, in fact, that’s how most of them spend the majority of their life, seemingly aimlessly wandering about. That’s usually how I write, with a vague notion of my destination and how the story unfolds. Okay, that's an overstatement, but for me, writing is a constant battle between journeys of discovery (where every possibility is worthy of exploration) and journeys of efficiency (shortest distance, two points, blah, blah, blah). It’s messy, sorta like sausage-making. And who wants to see that?

It’s especially bad for my wife. She has to patiently wait until I’m done with a story and have polished it to a fine sheen before she even gets to peek at it. She’s not a writer, and so I should take her input with that in mind. Right? But I don’t. Her opinion matters to me. Which is why I avoid asking for it until I’m beyond sure it’ll be positive.

Cripes, I have issues.

On the other hand, I ask my kids all the time to sit down and listen to what Daddy’s written. They love it unconditionally. But then again, they love it when I read Politico or Newsweek out loud to them, too (which probably goes a long way to explaining my son’s fascination with a certain politician, who shall remain unnamed [initials S.P., rhymes with parasailin’] and my daughter’s overfamiliarity with the phrase: “Drill, baby, drill!”). My kids love what I write. (And no, I don’t mention any of this in my query letters).

But it’s not just about always getting positive feedback. I don’t mind sharing my work with perfect strangers. Why is that? Sure it hurts when I get less than stellar feedback— even more so, since a lot of it comes from those in the know. So, why don’t I mind exposing myself to other writers, to admitting I’m lost or that my WIP is a mess?

Because I know their WIP journeys are, for the most part, just as messy, just as circuitous, just as seemingly directionless. Among this community of writers, it’s okay to get lost and to be lost. It's a writer thing.

How about you? Do you feel the same way about your writer’s journey? Or do share your journeys more than I do?
Posted by Unknown at 9:22 AM 1 comment:

Last month, the cassette player in my truck died. That's right, I wrote cassette player (yes, my truck was built in the last century). For the analogue-challenged MP3 generation, cassettes are those plastic things about the size of an iPod Classic that your parents used to record music on... from their vinyl LPs. (What are LPs? Oh, never mind.) Anyway, the point is, for weeks I mourned the passing of that player. Call me sentimental. I went through the same angst when my 8-track boombox died in high school.

The reason I'm bringing this up is because my reluctance to replace the cassette player with a CD player (or, better yet, a Bluetooth-enabled 4G networked XM-ready satellite radio/MP3 player with Bose electronics), is the same reluctance I struggle with in removing what doesn't work in my WIPs. But there's no denying it: There's no place for private sentimentality in a novel.

For the last week, I've been tweaking Chapter 9 of one of my YA novels. I thought it was because it contained some of the best writing I'd ever done, and while that may be true, it's not the reason I was spending so much time stalled out there. It was because it didn't work. I was engaging myself too much in adoring my lovely words and sentences, that it blinded me to the fact that what I'd written didn't add anything to the story. In fact, it detracted. Once I realized this, you know what I did? I went and ripped out the cassette player from my truck. It felt like I was ripping out my guts. But it made deleting Chapter 9 that much easier.

You've got to do the same with you revisions. Sure, if you're writing for yourself, keep everything. Who cares.But if your aim is to publish your work, you've got to be brutally honest with yourself when revising. Rip out what doesn't work, no matter how much you like it or the way it sounds.

My carpool mates are breathing a sigh of relief. Now, if I can just figure out how to download and make a Lynyrd Skynyrd/Journey/Chicago mix and get it transferred to my iPod, we'll be back in business.
Posted by Unknown at 9:58 AM No comments: