I've been noticing a proliferation of vanity URLs in place of the awkward polynumeric and totally anonymous URLs G+ is assigning to its users. The vanity URLs look like

I personally would love to see G+ allow vanity URLs, but in the meantime, going with a third party shortening service may cause you problems down the road, and may in fact hinder search results for your profile (it's an SEO thing). There's also the potential for a vanity URL company to stop supporting the link. And I've heard of some shortened URLs leading to the wrong profiles.

If you just want shorten your G+ URL, then Google owns its own URL shortener (http://goo.gl/). What you get is no less anonymous than the polynumeric one, but it's definitely less cumbersome. For example, my assigned G+ URL is:

but goo.gl shortened it to:

For a more technical explanation,check out this post from Cirruslabs.
Posted by Unknown at 8:24 PM No comments:

I hate when this happens

OK, not a post about writing or even remotely related to writing (although I suppose I could always think of using it as a metaphor of writing someday). I just really liked this sign, which we found in New Zealand on our drive to Franz Josef Glacier. 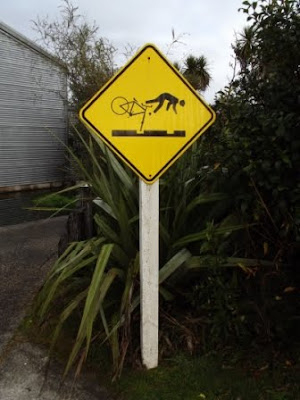 The Guilt (and Freedom) of Uncircling

I just had to uncircle someone over on Google+. I feel really bad about it, especially since they're someone in my own field and it feels like a betrayal. But I threw him out, blocked his posts and essentially blacklisted him from my life. Why? Because he was flooding my stream with garbage. If I wanted that, I'd read JA Konrath's Twitter stream-- not him, but all the people who follow him. Seriously, do you realy think I want to know your every thought? Do you really think everyone you're sharing with really wants to know the latest breaking back-page news?

Then why are you cluttering my space and time with it?

I've been on Google+ now for almost 2 weeks and I really like it. I mean, I really, realy like it. I love the humor; I love the relevant editorials and advice; I love the snarkiness. But most of all, I love the fact that pretty much everyone there gets it. Sure, I don't mind the occasional photo of the pet, the occasional update on the kids or what you had for dinner (looks good, by the way). These are things that make it worth connecting and sharing with you; they make you more human, not just a bunch of digitized content delivered to me over the ether. And, yes, every once in a while, I'll share such nonsense with you, too. Once in a while. But I'm trying to work here, and if you're constantly getting in my way of doing that, then it's not worth having you around.

What do you think? Am I being too harsh? Or do I have unrealistic expectations for this newest social media platform?
Posted by Unknown at 10:03 AM 8 comments:

Twitter and Google Plus: Shouting out to (or over) the crowd

As much as I love being on Twitter and the feeling it gives me of being able to connect to others who share my interests, sometimes it feels a bit like an exercise in futility. I don't say much; I'm a man of few words (except on paper, or screen), so when I do have something to say I like it to count. I extend the same courtesy to others, even fretting that I can't see everything being said by the people I follow. I worry when the people who follow me are streaming the tweets of a thousand other tweeps as well. Do my words get heeded when, mere seconds after posting them, they're already lost in the barrage of 140-character quips and quotes?

It makes me wonder if anyone is even listening anymore, if we're all just shouting into the chaos, hoping to be heard above the din. I know I'm not the only one who thinks this. I've been told by many others that to be heard, you have to shout louder and more often.

I've been on Google+ now for a week and so far I like it better, in part because it's still new and there are a lot fewer people on it. Even so, it's a definite improvement over Twitter. I like how you can share more and your followers can comment directly within the stream of the post. It's much more...responsive. I feel like I can actually catch my breath, comment, and people will actually see what I've said. For now. But the "crowd noise" is eventually going to take over like it did on Twitter. Already I can see it happening. We're flooding the world with our thought pollution, saying everything that's on our minds with little consideration to self-censorship.

I think maybe it's saying something that people want to heed. If you say something of importance, it will find its audience. Your words will cut through the fray.

BETWEEN TWO ENDS,
by David Ward

This review courtesy of NetGalley.com.

The aspiration of every storyteller is to make the reader believe that they are part of the story. But what if the story is so real, so wonderful, that the reader forgets and instead believes the fiction? And what if you had to get that reader to remember that it’s not real, because by doing so you might help someone you love? What if by even attempting it, you might also become caught in the story’s grasp and become lost to reality forever?

That’s the dilemma facing twelve-year-old Yeats Trafford, whose father entered the world of the Arabian Nights as a child and almost became trapped. He wished himself back, but the girl he accompanied, Shari, did not. Now, twenty years later, the father’s depression threatens Yeats’s family. Yeats must enter the story and bring Shari (now Shaharazad) back by her own free will and, in doing so, rescue his father.

But the storyworld won’t let her go so easily.

Transported to the shores of the Arabian Peninsula by no less than a recalcitrant pair of magical bookends (naturally), named Skin and Bones, Yeats faces considerable challenges. Things don’t go so well. In fact, we begin to question whether Yeats will even survive the experience long enough to get himself out, much less convince Shari to come with him.

“Between Two Ends,” a reference to Skin and Bones and an allusion to being within the story itself, satisfies without overcomplicating. Well paced, well plotted and enthralling from first page to last, David Wards achieves the storyteller’s goal on several levels while reintroducing us to a world at once familiar and strange. A perfect read for hesitant readers and well recommended for any boy or girl.

This review is also posted on the Amazon product page here.

Posted by Unknown at 9:55 PM No comments: