Just two weeks ago, Smashwords announced they had published three billion words. How big is 3 billion? Think of it this way: if you started at 1 and counted each second until you got to 3 billion, you'd still be counting ninety years from now.

That's a lot of words.

According to Mark Coker, Smashwords' founder, it's "an ebook publishing and distribution platform for ebook authors, publishers, agents and readers. We offer multi-format, DRM-free ebooks, ready for immediate sampling and purchase, and readable on any e-reading device."

Smashwords opened its doors in May of 2008. On October 7, 2009, they reported 150 million words published. One billion words was reached a year later. And seven months after that, that mark had  been doubled.

As of 4:30 this afternoon (PDT), the number of published words had grown to three billion, one hundred and forty-two million, or, more precisely, 3,141,924,287, meaning another 150 million words will have been added in just16 days.

Which made me wonder how explosive this growth in self-published words is and, if the trend continues, where that'll take us in the coming months.

Here's a graphical look at the numbers as they've been reported to date: 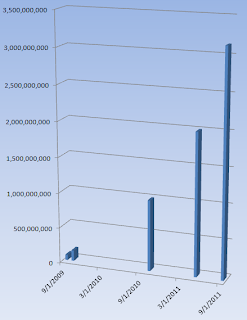 At this rate, Smashwords will reach four billion around the end of this year.

And when will they reach a hundred billion? Extrapolating out based on the current trend, just four years from now. 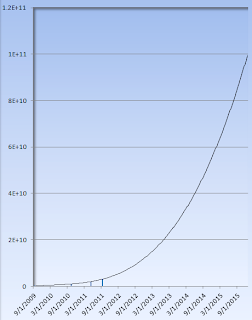 And a trillion? Well, not for another eleven years.

That's good. It gives me some time to catch up on my reading.
Posted by Unknown at 5:12 PM